Blow we will introduce three examples: the world wide web, BitTorrent and Skype 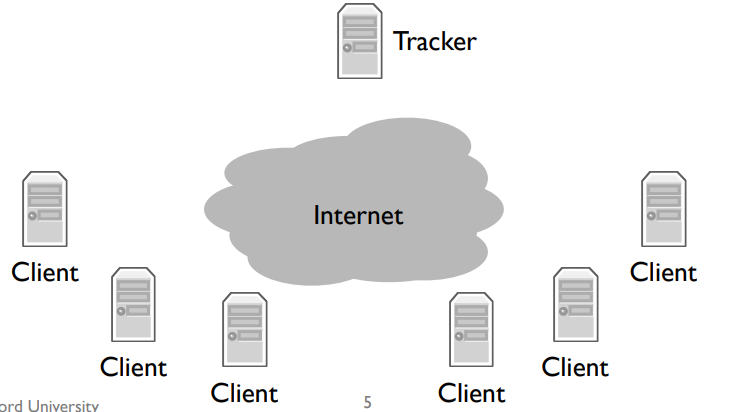 BitTorrent is a program that allows people to share and exchange large files.

A single client can request from many others in parallel, BitTorrent breaks files up into chunks of data called pieces.

When a client downloads a complete piece from another client, it then tells other clients it has that piece so they can download it too. These collections of collaborating clients are called swarms.

BitTorrent uses the exact same mechanism as the world wide web: a reliable, bidirectional data stream. When a client wants to download a file, it first has to find something called a torrent file.

This torrent file describes some information about the data file you want to download. It also tells BitTorrent about who the tracker is for that torrent.

A tracker is a node that keeps track (hence the name) of what clients are members of the swarm. To join a torrent, your client contacts the tracker, again, over HTTP, to request a list of other clients. Your client opens connections to some of these clients and starts requesting pieces of the file. Those clients, in turn, can request pieces.

Furthermore, when a new client joins the swarm, it might tell this new client to connect to your client. So rather than a single connection between a client and one server, you have a dense graph of connections between clients, dynamically exchanging data.

Skype: the popular voice, chat, and video service. You have two personal computers requesting data from each other

So the complication here is that if the client A wants to call the client B, it can’t open a connection. Skype has to work around this.

Rendezvous server: When you log into Skype, your client opens connections to a network of control servers.

This is called a reverse connection because it reverses the expected direction for initiating the connection. Client A is trying to connect to client B, but instead client B opens a connection to client A.

What does Skype do if both clients are behind NATs?

Relay: A kind of server. Relays can’t be behind NATs. 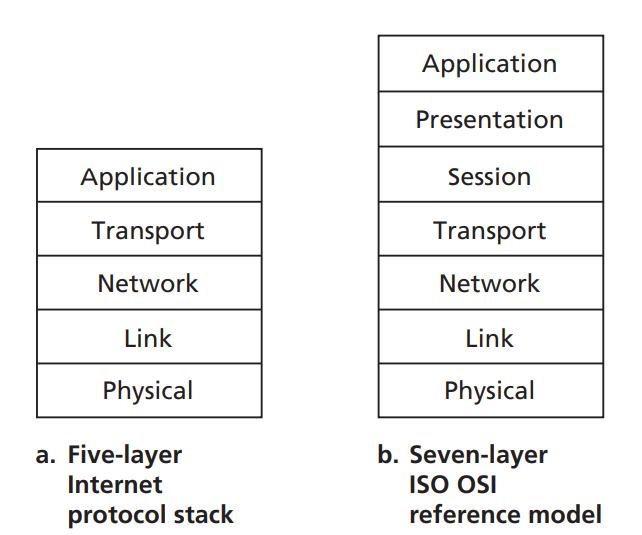 Each layer has a different responsibility, with each layer building a service on top of the one below, all the way to the top where we have the bi-directional reliable byte stream communication between applications.

The Internet is made up of end-hosts, links and routers. Data is delivered hop-by-hop over each link in turn.

The Link Layer’s job: carry the data over one link at a time.

The network layer’s job: deliver packets end-to-end across the Internet from the source to the destination.

Packet: A self-contained collection of data, plus a header that describes what the data is, where it is going and where it came from.

Network layer packets are called datagrams. They consist of some data and a head containing the “To” and “From” addresses.

The Network Layer does not need to concern itself with how the Link Layer sends the datagram over the link.

This separation of concerns between the Network Layer and the Link Layer allows each to focus on its job, without worrying about how the other layer works. It also means that a single Network Layer has a common way to talk to many different Link Layers by simply handing them datagrams to send. This separation of concerns is made possibly by the modularity of each layer and a common well-defined API to the layer below.

We must use the Internet protocol (IP)

UDP (User Datagram Protocol): just bundles up application data and hands it to the Network Layer for delivery to the other end. UDP offers no delivery guarantees.

Each layer communicates with its peer layer: each layer is only communicating with the same layer at the other end of the link or Internet, without regard for how the layer below gets the data there.

IP: the thin waist of the Internet

IP is the only choice if we want to use the Internet.

IP datagrams consist of a header and some data.

IP send the datagram to the Link Layer that puts it inside a Link Frame, such as an Ethernet packet and ships it off to the first router.

The IP service sends Datagrams from end host to end host; it is unreliable, but makes a best-effort to deliver the datagrams. The network maintains no per-flow state associated with the datagrams.

Datagram: The datagram is packet that is routed individually through the network based on the information in its header. —> self-contained

3.4 The Detail/features of the IP Service Model 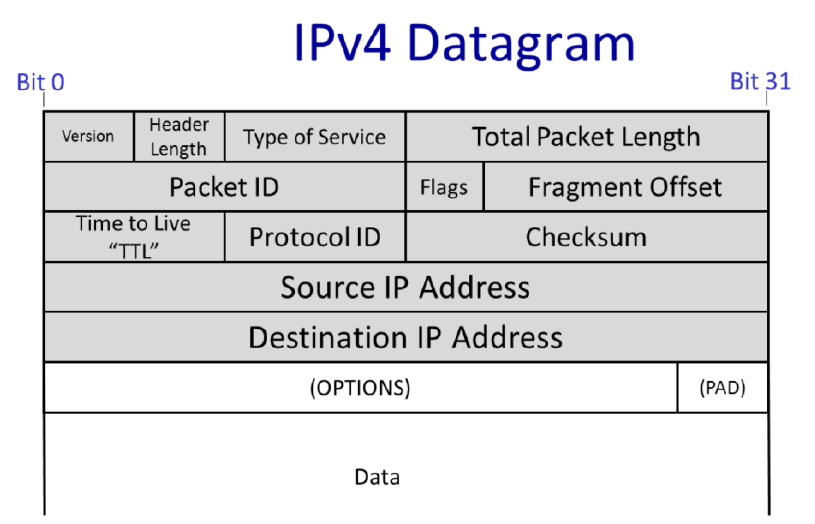